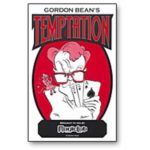 Of the hundreds of people on whom Gordon Bean field-tested his new effect, Temptation, a particularly notable spectator was one Greg Simko, C.E.O. of the U.S. Playing Card Co. One evening, Mr. Simko was at The Magic Castle to discuss a custom deck being made for the film Shade, and when asked to perform an effect for him, Gordon brought out the Ace, Two and Three of Spades.
The routine’s first phase sent the Three visibly from Gordon’s right hand to his left hand, and Mr. Simko smiled. He had seen a lot of amazing sleight-of-hand and assumed this was more of the same. Next, the Ace jumped the other way, and Mr. Simko leaned forward. Finally, the Two jumped down to his own hand and Mr. Simko knew the only possible explanation. “You’re using some of those special cards we printed for you.” Gordon smiled and motioned for him to pick up the cards. Mr. Simko examined them with an expert’s precision. “But they are ordinary Bicycles,” said Mr. Simko. “The finest cards made,” agreed Gordon with a smile. I wouldn’t use anything else.”
No Sleight of Hand Required
Photo-Illustrated Instructions
Cards Made by the U.S. Playing Card Co.
Cards May Be Examined
“Temptation is the perfect walk-around version of Three-Card Monte. Since all the cards are examinable at the end, it is a practical as well as a mind-blowing effect.” -Whit Haydn

Be the first to review “Temptation” Cancel reply