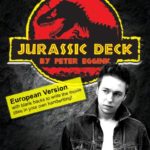 The magician shows a deck of 52 different cards. Different movie Titles are boldly written black on the red back of each card. A movie collector’s club prediction card is placed on the table in full view. The magician says “Since I’m a huge movie fan, I wrote the names of 52 of my favorite movies of all time on the back of each playing card. I did this for a reason though. If I can’t decide which film to watch, I just pick a card and go with whichever one is on the back”. The magician continues “I’m now even able to predict a movie.. allow me to show you what I mean”.

The magician spreads the deck face up and a spectator is asked to pick any card they see at random (no force). The spectators freely chosen card is placed face up next to the tabled prediction. Magician: “If the movie represented by your freely chosen card matches the movie which is on my prediction card, wouldn’t that be impressive?”

When the cards are placed back into the box, even the card box changes to the theme of the movie!

Be the first to review “Jurassic Deck” Cancel reply