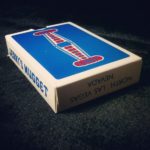 In 2008, sophisticated counterfeiters super-saturated the market with fake Jerry’s Nugget playing cards. Random videos started appearing on YouTube from upset purchasers. While the illegal versions look remarkably genuine, most playing card experts can tell the difference easily, as the fake decks were made from cheap cardboard.[8] Some of the signs would be that of the box. The stamp on the legitimate version of the deck is blue and off center. Another sign would be on the flap, a long flap with no context on it. If you cut open the box and look inside there will be a printed year on the side. Last but not least would be the color, the originals are off white and lightly yellowed.