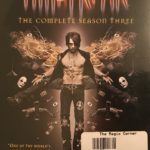 3 DISC SET CONTAINING ALL 20 EPISODES FROM SEASON THREE OF THE CRITICALLY ACCLAIMED A&E TELEVISION SERIES AVAILABLE ON DVD FOR THE FIRST TIME.
20 astonishing episodes & tons of bonus features
An incredible line-up of guest stars falls under Criss’ spell
Criss Angel is the only five-time winner of Magician of the Year
Some of his tricks are too intense for television and have never been aired.
Whether levitating to the tip of the Luxor pyramid or getting steamrolled into a bed of glass, Criss pushes the limits of his body and reality further than anyone ever has.

In this amazing box set, Criss brings illusion and mind-blowing tricks to a whole new level! Packed with death-defying escapes, fearless stunts, and astonishing physical feats, as well as unbelievable up-close-and-personal sleight-of-hand, this season of MINDFREAK raises the bar on magic to unprecedented heights.

Go behind the scenes with today’s most exciting master of surrealism in the MINDFREAK Season Three. A cross between Harry Houdini, Cirque Du Soleil and Fear Factor, each mind-boggling episode captures the creative genius at work, preparing and training for his death-defying feats.

Criss’ new daredevil performances – all live and unstaged – include escaping from a racing truck filled with explosives, vanishing a speeding Lamborghini, and levitating 500 feet above the Luxor Hotel & Casino in Las Vegas. Whether breaking out of jail – in the nude! – or being steamrolled on a bed of glass, Criss Angel once again proves that he’s the ultimate maestro of modern magic.